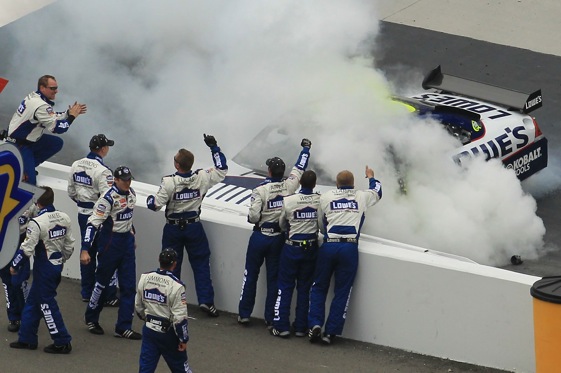 Jimmie Johnson finally got his first career victory at the Bristol Motor Speedway after his 17th race in this storied racing facility.  This victory was Johnson’s 50th career victory tying him with another Johnson, the legendary Junior Johnson, and Ned Jarrett for 10th place on the all time NASCAR win list.

The Bristol victory is Johnson’s 3rd victory out of first 5 races in this young season of 2010!  Don’t look now boys, but Johnson has a huge leg up on all of the competition early in this season in trying to score his 5th championship in a row!

A QUESTION FOR ALL:

Does anyone in the field have something for the #48 team?

Finishing behind Johnson was Tony Stewart in second, Kurt Busch in third, Greg Biffle in fourth, and Matt Kenseth rounding out the  top 5 finishers.  Having a very good day at the Bristol Motor Speedway was another Hendrick Motorsports team mate of Jimmie Johnson, Dale Earnhardt,Jr. crossing the stripe in 7th place.  That finish was enough to move Junior up five places into 8th place in the Sprint cup point standings. (Go #88, excuse my partiality!)

With Matt Kenseth’s 5th place finish, it was good enough to move him into second place just 1 point behind the leader, Kevin Harvick, after five races.

Did you notice that #99 and the #12 cars never even became a threat to each other Sunday?  Do you think that the “meeting” with NASCAR had anything to do with that?  What is your take?