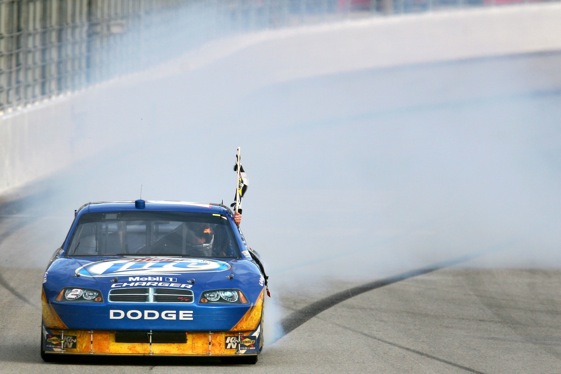 Things overlooked in Atlanta Sunday in light of “The Wreck”:

3. Kasey Kahne led the most laps, but finished fourth for Richard  Petty Motorsports.

7. Dale Earnhardt, Jr. started on the pole and finished 15th!

Most interesting quote from the race:

8. Steve Addington, the crew chief no longer good enough for Kyle Busch at Joe Gibbs Racing, took the older Busch, Kurt, back to Victory Lane at the same track where he got his first victory in 2008 with Kyle Busch.  “It is a good feeling to know that your driver wants you to go to work for him,” Addington said in a statement that showed a lot of class but made a strong point.

9. The Atlanta Motor Speedway folks were probably extremely pleased that the amount of empty seats was not a big topic of conversation with the media!

10.  Brad Keselowski is probably glad to have an off week to recuperate from the Edwards “Cheap Shot”!  He also will need to reload and prepare for some of the other drivers who, no doubt, are lining up for their shot at him!

Have plenty of haulers at the tracks with back cars onboard for the #12 for the remainder of the the 2010 season, you may need them!