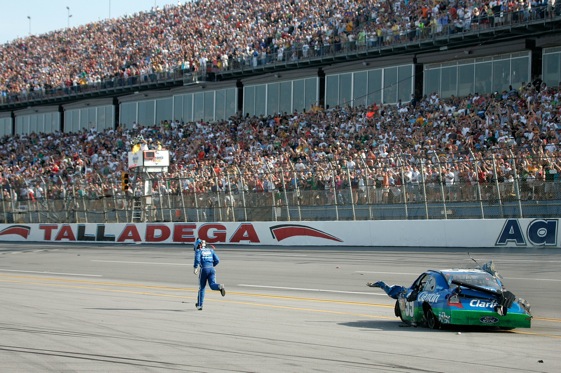 After NASCAR just barely slapping the hand of Carl Edwards for his blatant actions Sunday, is there any fan that is not somewhat stunned??  Did NASCAR miss the boat?  Did NASCAR even see the same race that millions of us watched?

If Mike Helton and the rest of the NASCAR hierarchy have switched gears so rapidly from protecting the fans and the drivers, from safety first and foremost, then look out!!  With the precedent that was just set on Tuesday, I believe that NASCAR is looking at changing the type of racing that we will be seeing for the rest of the season.

With just a light tap on the wrist for purposefully destroying a race car, and jeopardizing race fans safety, NASCAR is setting themselves up for a “destruction derby”!  Race car drivers have always extracted revenge, some smartly and some not so smartly.  But NASCAR has always been there to mediate and penalize when the “not so smartly” thing was done!

This week NASCAR has let down the racing community and the race fans as well!  Safety was definitely compromised and that should be strictly and stiffly re-enforced!  Would this same lightly tapping of the wrists been the punishment if a lesser known driver been involved?  Remember the huge fines and loss of points levied not so long ago?  What has happened?

If NASCAR allows this illogical thought process to continue in their approach this season, you may see a race finish that replicates the picture above….a race car driver running to the finish line to win the race, ’cause all the cars have been destroyed!

That old phrase,“just bring me back the steering wheel” will really have a new meaning!

What is your take on NASCAR’s almost non-existent punishment of Carl Edwards?