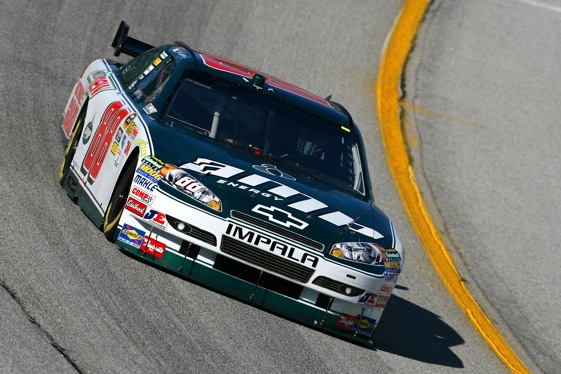 As the Sun was dropping in the western horizon, the temperature was following closely at the Atlanta Motor Speedway Friday evening.  The pole winner, the driver of the HMS #88 AMP Energy/ National Guard Chevy  was equally as cool as he climbed out of his race car.

Dale, Jr. scored his first pole since 2008, capturing the pole with a speed of 192.761 mph.  That speed was  more than a half a mile per hour than the runner-up qualifier, Kyle Busch.  Not known for his qualifying prowess, this is only Dale, Jr.’s ninth career pole, the second pole at Atlanta, and the fastest ever turned in a CoT chassis.

Is this turnaround the results of the off season effort by Rick Hendrick and both crew chiefs of the #5 and #88 teams to resurrect the #88 team to a championship caliber?  “Hopefully we will see the same type of improvements for our team on Sunday,” said Junior, who hasn’t won a race in the last 60 attempts!  “It’s definitely a step in the right direction.”

This pole is the second one for him since he transitioned to Hendrick Motor Sports in 2008, and follows a second place qualifying effort for the Daytona 500 three weeks ago.