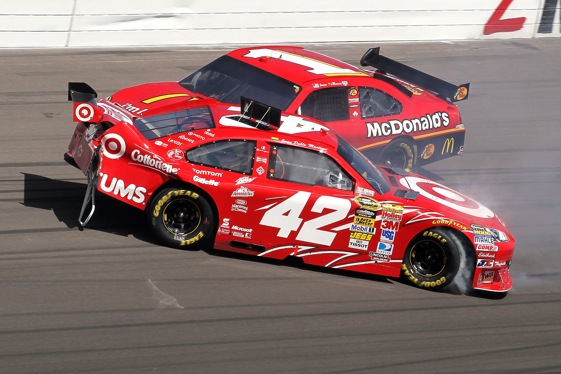 One might wonder just how much venom would have spewed Sunday after the Las Vegas Shelby American 400, had not Juan Pablo Montoya and Jamie McMurray been teammates?  As it was there was plenty spewing out  to go around!

The two team mates collided with each other in turn #3 early on in the race at Las Vegas Sunday.  Afterwards, JPM was anything but delicate with his angry remarks about  his new teammate, who won the season opener, the Daytona 500.

“He( McMurray) ran straight into my ass”, Montoya, who appeared to have had at least a top five car for the Las Vegas race, finished 37th as a results of that wreck, said.  “He nearly ran me into the fence (in turn# 2)  as well.  I don’t know.  He is not doing himself any favors.”

“Just Jamie, plain and simple just wrecked us,” the former F1 driver said.  “Every time I am around him, he wants to run the s**t out of me!  I don’t know if I can say that, but I just did!  On the restart, I was inside of him, I think he got tight and never lifted, I didn’t hit the fence because….it was just a miracle.  I then arched it into turn 3 and he plain and simple just wrecked us.  I am sure on the radio it was, ‘Ah, I didn’t mean that.’  He is trying to prove to people that he can drive a race car and I guess he isn’t doing too many favors on this team.”

McMurray waived off his teammate’s criticisms!

So it this reporter’s opinion that the “honeymoon” is over for the Earnhardt-Ganassi Racing teammates!!  Stay tuned for the rest of the serial adventures of, “The Juan and Jamie Show”!