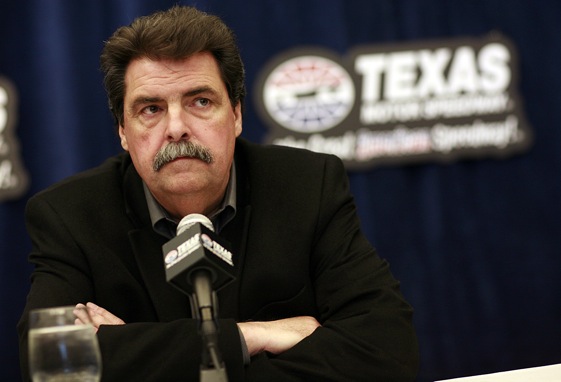 NASCAR President, Mike Helton, says there is a “doggone g0od chance” the athe spoilers will be back on the Sprint Cup cars by the Texas race in April.  That does not necessarily mean that Texas will be the first race with the spoiler blades back on the rear deck lid, however.

The blade was first tested at Texas Motor Speedway back on Jan. 19 and 20.  One team from each of the four manufacturers was there to test the rear spoiler blade on their cars.

Meanwhile, there is a scheduled open test at Charlotte Motor Speedway on March 23-24.  that means that the spoiler blade could be used as early as Martinsville on March 28, Phoenix on April 10, or the Texas Motor Speedway.

“We’re hoping that within the next two or three races we’ll be at point where we can say, it is time to take off the wing and put the spoilers back on”, Helton said at a pres conference at TMS during Media Day Monday.

Texas Motor Speedway President Eddie Gossage, who posed that question to Helton, is convinced that the first “blade” race will be at Texas Motor Speedway.  Additionally, Gossage believes that the new rear spoiler could upset the balance of power in the Sprint Cup series, in which Hendrick has been so dominate in for the last 4 seasons!

After an off season of discussions with the race teams, Helton said the NASCAR teams have been “aggressively” testing the blade anytime there has been a Goodyear tire test slated.  The rear spoiler blade inception is to improve passing and prevent the boxy race car from getting airborne when turned around.  Both of theses ideas will improve the overall safety and quality of the races.