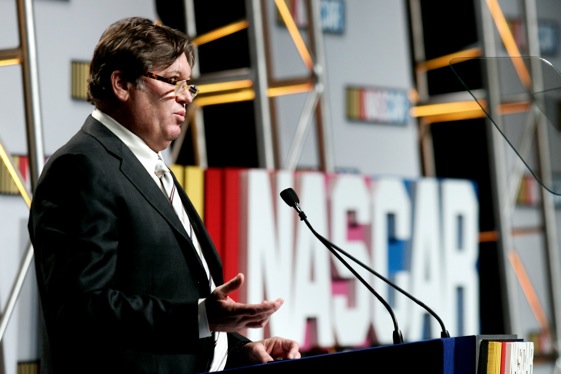 It appears that there is some kind of populist movement afoot at the headquarters of NASCAR.  For some strange reason, it appears that those in the HQ building are listening to both the fans and the race teams.

That is a far cry from how the organization was ran under the “dictatorship reign” of Big Bill France and his son Bill France, Jr.  Now that Brian France is at the helm of NASCAR, there have been several significant changes instituted recently,” The Chase for The Cup” being one major change.  It seems that, unlike in the past when the wheels of NASCAR turned much slower than the wheels of the race cars, the wheels of the present regime might be catching up with the speed of the present day race cars.  But make no mistake, NASCAR is still not a democracy!

With the announcement Thursday of several new changes that will be instituted before and in the early part of the 2010  season, NASCAR is actually moving closer to the 21st century.  Even though the carburetors were phased out of the production cars in the middle 80’s, NASCAR continued to mandate their usage in their race cars.  From NASCAR’s standpoint allowing fuel injection in the race cars was harder to police the “creativeness” of the crew chiefs of NASCAR!

Nevertheless, with the announcement Thursday of several changes that are going to happen before the start of the 2010 season, and a couple that will be put into affect by April, the discussion now has turned to allowing the cars to have electronic fuel injection instead of carburetors.  NASCAR has finally decided that it is time to fade out the low-tech carburetors.

NASCAR vice president of competition, Robin Pemberton, has announced that there is presently an internal investigation regarding the use of electronic fuel injection in the race cars.  “We are already testing fuel injections systems,” he said.  “Some teams already have prototypes in testing and our goal is to shoot for 2011.”

The wheels of NASCAR are slowly turning, and apparently trying desperately to pick up speed!

What is your thoughts on NASCAR switching from carburetors to electronic fuel injection?