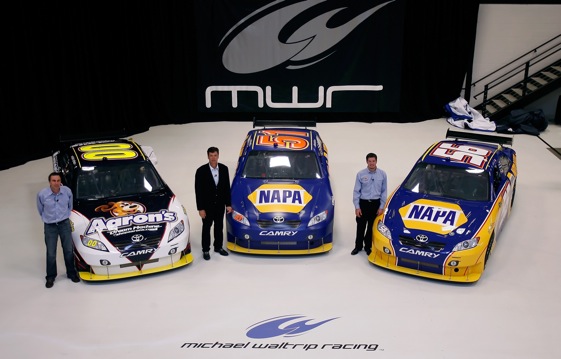 After 25 years and 759 starts in NASCAR, Michael Waltrip is backing off of the “get loud” pedal.  That’s right, Mikey plans to slow up, but only on the race track.  The owner of Michael Waltrip Racing, which fields cars for David Reutimann and now Martin Truex, Jr., is bringing his driving career to a halt.

“I’m going to run Daytona, The Shootout, and the 500.  That’s the only Cup races that I am going to run in 2010”, Waltrip said Wednesday night during a stop at the NASCAR Media Tour sponsored by the Charlotte Motor Speedway.  “I am comfortable with that,” Waltrip notes.  In his 25 years of Sprint Cup racing he has notched 4 points race victories, two of those were the Daytona 500 of 2001 and 2003.  Additionally, Waltrip won The All-Star race several years ago for the Wood Brothers Racing in their famous #21 Ford.

For Waltrip’s 2010 Sprint Cup venture, and as kind of a variation of and throw back to the “good times’ with Dale Earnhardt, Inc., and to commemorate his four victories, Mikey is turning in his #55 NAPA Toyota Camry for the #51 NAPA Toyota Camry. ( Waltip’s four Cup victories were in the DEI #15 NAPA Chevy.)

Even though Waltrip is climbing out of his Sprint Cup ride, the #55 Napa Toyota Camry, he is not pulling the plug completely on his driving career.  Mikey has been working on putting together a deal to drive in The Camping World Truck Series.  He has a partial schedule package with Billy Ballew Motorsports, that’s the team that Kyle Busch had driven for in the #51 Miccosukee Tundra truck.

At 46 years old, Michael Waltrip would like to end his career with a big win, like another Daytona 500 victory!  Even though Waltrip is slowing his driving career down, he is still very much involved in NASCAR.  He is the force behind Michael Waltrip Racing, as well as a TV analyst  for Speed TV.

So fret not sports fans, Mikey is not riding off into the NASCAR sunset!  Sit down in your favorite easy chair and buckle up, ’cause we will still be privy to the quirkiness of Michael Waltrip for years to come!

One Comment on “Mikey’s Gettin’ Out Of The Gas”