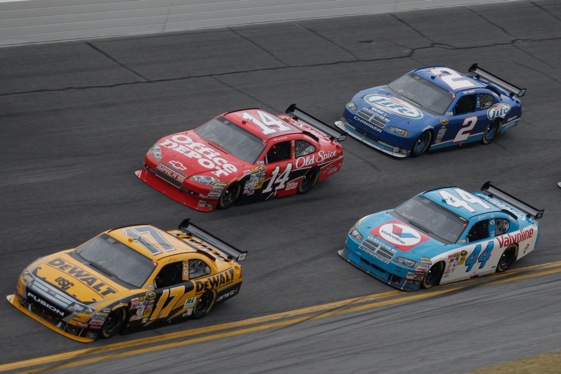 NASCAR managing director of Corporate Communications, Ramsey Poston, said Monday that rear deck wings could be removed from Sprint Cup cars early this coming season, though not before Daytona.

Mr. Poston said,” should NASCAR decide to replace the wings with a rear deck spoiler blade, that doesn’t signal the end of the Car of Tomorrow (CoT)”.  He continues, “that this would only be a continuation of the evolving CoT”.  He added, ” it is no secret that both the drivers and the fans do not like the looks of the rear wing.  They just do not think that it has all the looks of what they think a race car should look like.”

“Ok, if we go back the rear spoiler and have no loss of competition, or we see improved competition the decision is even easier, then we’ll probably head down that road.  So we have got some work to do.”

The initial stages of that work is now underway.  NASCAR is meeting with all owners, drivers, and teams face to face.  There are a variety of issues being discussed with all of them.  But foremost is the topic of how to make the CoT racier and more competitive.  After all, the CoT has been the main source of discussion since its inception into the Sprint Cup racing.

There were three main reasons for the change over to the CoT.  The car was supposed to be safer, increase competitiion, and lessen the cost to the owners.  Only the first point of increased safety has been proven, the other two points are still up for a vote.

If the above issues are addressed, changing back to a spoiler blade and modifying the front end splitter, safety will remain a major concern.  There is hope that addressing those issues will also increase competition, as well.  Just these two issues alone will require open testing with the Sprint Cup teams before implementation occurs.

Poston adds that in addition to the changes on the cars, there is a desire on NASCAR’s part to let the drivers display their talents on the race track.  There is a possibility that NASCAR is willing to eliminate the double yellow line at Daytona and Talladega that  start the “out of bounds ” territory.

The key to all these potential changes is the affect on the quality of racing in NASCAR.

What do you think NASCAR should do about the rear wing?  What about the “double yellow” lines at Daytona and Talladega?