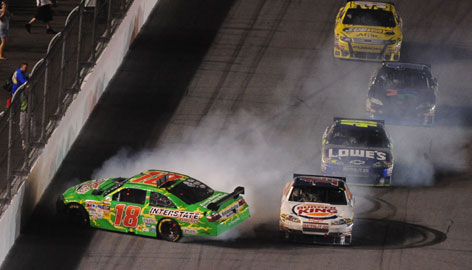 The 2009 season produced a few surprising, as well as, exciting finishes.  Workingonmyredneck has compiled his top five for the 2009 NASCAR season.

Kasey Kahne turned a normally dull road race into a very exciting last 10 laps!  Kahne’s roots in racing emanates for the dirt tracks of the West Coast, primarily driving sprint cars in The World of Outlaws series.  So it has been safe to say that road racing was not his forte!

But what was to unfold that day was a very exciting last 10 laps of racing!  Kahne held off the “big dogs” of NASCAR road racing in a series of 4 restarts, including “The Smoker”, Tony Stewart.  The results was Kahne’s very first road race victory!  It was also Richard Petty Motorsports’ first NASCAR victory since 1999!

For most of this 400 mile race, Jimmie Johnson stunk up the field leading nearly three quarters of it.  However the last 27 laps made for a very interesting finish.  When the caution flag flew for the 10th time in the race, the pit strategies started to unfold.  Johnson elected to pit for four tires, while others including Stewart and Biffle took just two tires.  During Johnson’s pit stop, a most unlikely hiccup occurred and the results put Johnson back to 9th position on the restart.

When the green flag dropped for the restart, Johnson ran through the field like a warm knife through butter!  He caught the two leaders with nine laps to go as Stewart passed Biffle for the lead.  It took just five action packed laps for Johnson to overtake Stewart for the lead, the victory, and the Sprint Cup poinst lead!

The races at the Michigan International Speedway almost always result in fuel mileage determining the outcome of the race, this was no exception.  Greg Biffle and Jimmie Johnson stage a real duel and it was apparent that one or both would run short of fuel.  As Jimmie Johnson took the white flag, signaling one lap to go, his engine sputtered and ran dry of that precious commodity called fuel.  That gave the lead to Biffle.  But as Biffle exited turn two and headed down the back straight, his car too ran out of gas handing the lead and the victory to a fuel conserving Mark Martin!

This race introduced “Blazingly Bad” Brad Keselowski to the casual NASCAR race fan!  We have all seen the video of the last 300 yards of the race, a spectacular and slightly horrific finish to that race!  Even though Carl Edwards is a licensed pilot and flies his own airplane to the races, this was the first time that Edwards tried to pilot a 3400 pound race car flying backwards!  He was totally unsuccessful in keeping the car from getting up into the catchfence and being destroyed.

The Coke Zero was the first restrictor plate race in 2009 with the new double file restarts, “shootout style”.  With five laps to go the new double file restarts would prove to crank up the intensity, as well as the  excitement of this race.  This restart pitted former team mates from Joe Gibbs Racing, Tony Stewart and Kyle Busch.  Both of these drivers are hard chargers and extremely tough competitors!  One only had a to know that this was going to be a finish to remembered!

The fans anticipated, rightfully so, that only one of those two drivers would come home with the win, while the other driver would only bring back the steering wheel to the hauler!  With one lap to go Busch was in the lead wall the while “The Smoker”, Tony Stewart, was wearing out Busch’s bumper.  Stewart got a run on Busch going back the back straight and looked like he would get around Busch on the high side.  Busch pulled out to successfully block Stewart.  Exiting turn four, Stewart made a move to the inside.  Busch successfully blocked Stewart for the second time.  Heading for the tri oval and the finish line, Stewart made a move on the outside.   For the third time Busch moved to block Stewart.  This time Stewart didn’t back out of the gas, got into Busch’s right rear quarter panel, turning Busch’s car hard to the right careening into the retaining wall, and leaving Busch’s car a pile of rubble!

These stories are Workinonmyredneck’s top five stories, what are your top five races or favorite finishes of 2009?