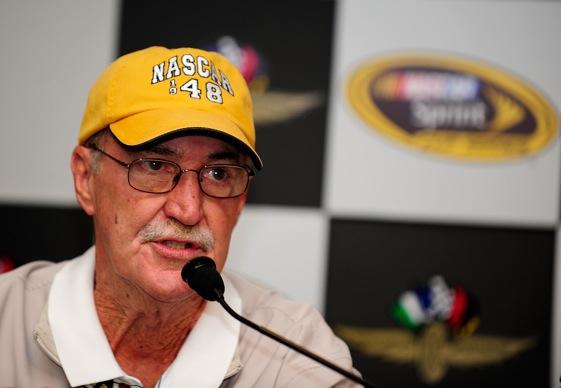 Jim Hunter, age 70, the NASCAR Vice President of Corporate Communications is in for the fight of his life!  Mr. Hunter is suffering from lung cancer.

Throughout his many decades in racing, from running Darlington Raceway all the way to his present role as a NASCAR excutive, there has not been a single individual who has exerted any more positive influence on the sport than Jim Hunter.

They say that none of us are irreplaceable, but in Jim Hunter’s case that may not be so.  Hunter was the guy to go to for off-the-record-information.  You knew that what he was telling was the straight scoop, even if you couldn’t quote him on that.  He understood the needs of the writer, the aggravation, the deadlines, after all he was one of them at one time!

Whenever there was a flap in the sport, it was Jim Hunter who was the peacemaker, the diplomat, the figurehead, representing NASCAR keeping the peace.

If there is a record for spreading peace and goodwill, Jim Hunter owns it!

Now the man who was the peacemaker of NASCAR is desparately in need of some good fortune, because he is battling cancer and is in the fight, of and, for his life!

Workingonmyredneck is keeping Mr. Hunter in our thoughts and prayers.