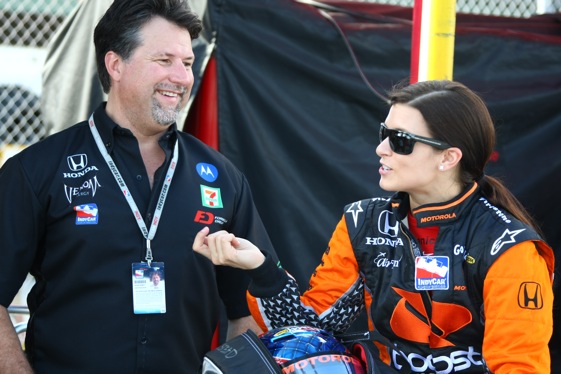 Well it is official, Danica Patrick is coming to JR Motorsports, co-0wned by Dale Earnhardt, Jr. and Rick Hendrick, for a limited Nationwide Series “test run”!  It is the advertising coup of the new century!  Since GoDaddy.com is already the chief sponsor of JR Motorsports, and now for 2010 the primary sponsor for Hendrick Motorsports #5 Chevy, it is a natural “fit”!

Jayski.com is reporting that the deal with JRM is for about a dozen races  driving #7 JR Motorsports Nationwide Chevy (her IRL car number) with GoDaddy.com as the primary sponsor.

Workingonmyredneck agrees with my friend, Bruce Simmons at NASCAR Bits and Pieces, that since Ms. Patrick is transitioning to the Nationwide Series on a limited basis, it can only mean learning will be on a limited basis as well!

What does Danica Patrick bring to the Nationwide Series?

Here at workingonmyredneck it appears that what she brings to NASCAR is; big sponsorship money (GoDaddy.com and maybe Motorola later), a female fan base interest, some female mystique, and let’s face it she ain’t bad looking either!

What is your take on this slowly developing story that was anything but a secret deal?