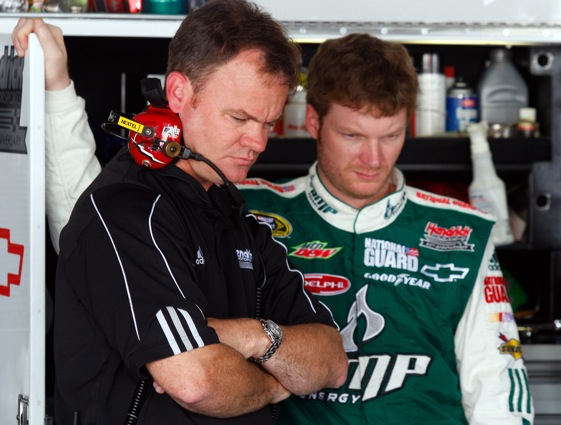 With the passing Thanksgiving it is time to reflect on our sport’s 2009 season.

With the wins at Daytona and California by the #17 Dewalt Ford, it appeared that Roush-Fenway Racing was off to a dominating start to this season.  But RFR soon fizzled, not to be a factor for the rest of the 2009 season.  Kenseth, Biffle, and Edwards were just memories when it came to winning races this year!

As far as Joe Gibbs Racing, they were significantly less of a factor this season than they were in the 2008 racing season.  Denny Hamlin and his #11 FedEx Toyota didn’t even approach the winner’s circle until late into the 2008 season.  In fact it was not until the 21st race of the season, at Pocono, that Hamlin won a very emotionally charged race for him!  Likewise, ol Kylie Busch and the #18 M&M’s Toyota was not hardly involved in the headlines of the 2009 season.  Kyle went to victory in Las Vegas and Bristol, races #3 and #5, but only won two more races in the next 31 races!

Richard Childress Racing did not score a single victory in the 2009 season.  Additionally that organization failed to put any of its four race teams into the 2009 Chase!

Stewart-Haas Racing was one of the surprises of the 2009 season.  Not only did Tony Stewart take his #14 Office Depot Chevy to the winners circle, they led the points for more than half of the season.  Quite surprisingly the second team, the #39 Army Chevy qualified for the Chase as well.  Not bad for a quasi-upstart team!

A very surprising bright spot to the 2009 season was the rise of JPM, Juan Pablo Montoya, to the forefront of NASCAR.  JPM  in the EGR #42 Target Chevy came on strong in the last half of the season to secure a berth in the Chase and remained a viable contender throughout the Chase.

Lastly the discussion turns to the Henrick Motorsports stable of cars. The #24 Dupont Chevy with Jeff Gordon and Steve Latarte were very consistent all season staying in the top five from the very early part of 2009.  The real surprise the the HMS stable was the 50 year old Mark Martin driving the #5 Kellogg’s/Carquest Chevy!

The one disappointment to the HMS stable was the lack of performance out of the #88 AMP/National Guard Chevy driven by Dale Earnhardt, Jr.  It just seems that the team just couldn’t “seal the deal”.  It would appear that this team is in a dilemma.  They have the same equipment as the other three teams, now that team must step up their game, “or else”!  Go #88!  (My overzealous partisan Junior Nation affiliation slipped out!)

To no surprise to some and to great surprise to others, Jimmie Johnson and the #48 Lowe’s Chevy race team went to a place that no other driver and team has been…….four consecutive championships!  When the weather turns cooler and there are ten races to go, the Chase format, there is no team more focused, more determined than Chad Knaus and Jimmie Johnson, PERIOD!

Workingonmyredneck would like to add to all the other praises that have been heaped upon the four time championship team.  The #48 Lowe’s Chevy has set the bar extremely high for the rest of the competitors!  Trying to compete and emulate this team is going to very difficult in the coming years.  History may not see this level of dominance for quite some time in the future.  Congratulations to Jimmie Johnson and Chad Knaus in rewriting NASCAR history!

2009 was a great and histroic NASCAR season.

Turning to the 2010 season, which is rapidly approaching:

What is your take on the 2010 season? Who will emerge next year as the dominating force in NASCAR?  Can the #48 Lowe’s Chevy make it five in a row?  Will Jeff Gordon ever be successful in the “drive for five”?  Will 2010 be the year that the best driver never to win a championship does it, Mark Martin?  Is 2010 finally the year that Dale, Jr. breaks out of the shadow of greatness, Dale Sr., to establish himself as a champion?