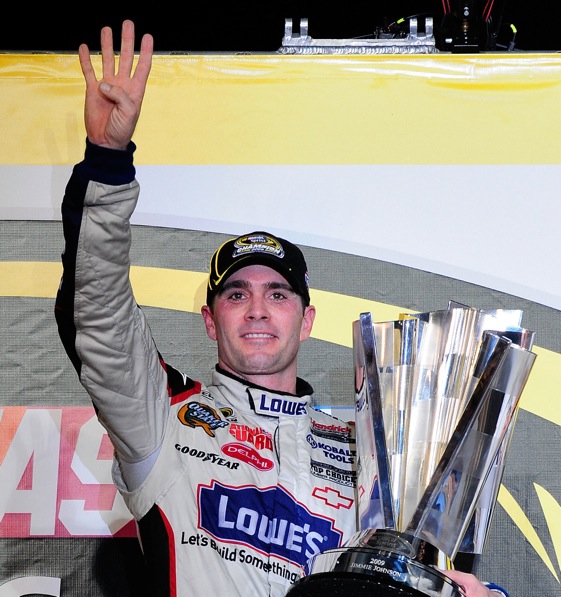 The photo says it all!  Jimmie Johnson is in uncharted land.  He is the first driver to win four consecutive championships in the 61 year history of NASCAR!

The Hendrick Motorspsorts #48 Lowe’s Chevy team has just captured its fourth consecutive championship in only its eighth season of existence.  Quite a remarkable feat in this era of parity and intense competition.  This team has won 47 races in eight season in NASCAR!  But more importantly, this team has won 18 of the 60 races in the Chase 6 seasons of the Chase format!  That is  winning 30% of all Chase races!  Here are some comparisons of HMS to other championship organizations.

With the announcement that Rick Hendrick made this past week of signing Jimmie Johnson to a contract extension, and working on a lifetime contract for Chad Knaus, that news can only make the competition break out in a cold sweat!

Workingonmyredneck would like to offer our congratulations to the entire #48 Lowe’s team for accomplishing something that has never been done in the 61 year history of NASCAR!