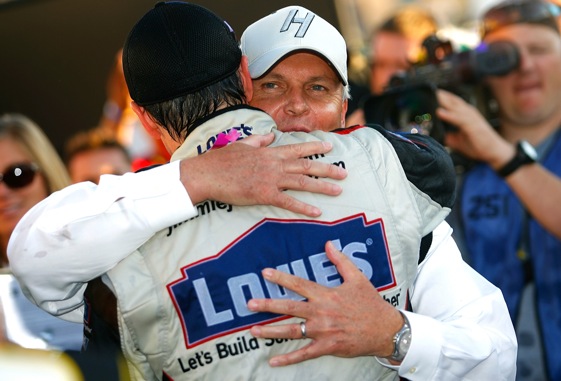 Team owner, Rick Hendrick, has announced that Lowe’s has re-upped their contract through the 2013 season, thus enabling the #48 team to continue together for four more years.  This proclamation comes on the cusp of Hendrick Motorsports, almost certain, ninth NASCAR championship, and the #48 Lowe’s Chevy’s fourth consecutive Sprint Cup title!

The current 2nd place contender in the points, Mark Martin is signed  to a contract for two more years at HMS.  Jeff Gordon has a lifetime contract with the Hendrick organization.  The one disappointment in the HMS stable is Dale Earnhardt, Jr, who currently has three more years on his contract.  So it appears that the Hendrick Motorsports stable of drivers are secure and the competition is shaking in the boots!

The real key to the success of HMS isn’t necessarily that the organization has an abundant of financially secure sponsors, but more realistically that Rick Hendrick has been able to employ and maintain key individuals in place in the organization over the long haul.  He is master of creating a “family” atmosphere in all of his businesses, including Hendrick Motorsports!

With Jimmie Johnson and Chad Knauss both secure in the organization for the foreseeable future, there are more records to come to HMS!