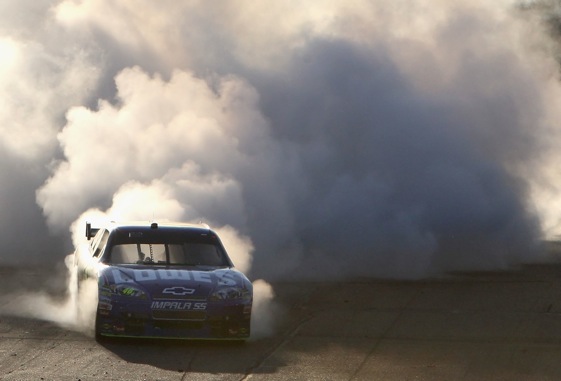 The HMS #48 Lowe’s Chevy driven by Jimmie Johnson rebounded in the ultimate fashion Sunday at Phoenix International Raceway’s Checkers O’Reilly Auto Parts 500 in Avondale, AZ!  In what has come to be traditional #48 Lowe’s Chevy Chase productivity, the team responded after a horrible previous race at Texas with a dominating win at Phoenix!  The win Sunday has all but put an exclamation point on what most definitely will be that team’s fourth consecutive championship!

That’s right folks, you can tear down the tents, wipe the grease paint off of the clowns faces, the “fat lady” is tuning up and going to sing her Auria!  Turn out the lights, the part is over!  What we have witnessed has been truly amazing.  Not only have we witnessed “Tornado Jimmie”, but also we have witnessed one of the greatest disappearing acts by nine of the competitors in recent NASCAR history!

Ten weeks ago we were touting this group of 12 drivers as the best of the best.  Now nine of those drivers have faded like a pair of Levi jeans!  Jeff Gordon in the HMS #24 Dupont Chevy is in third place, back a distant 169 points.  His chances fade immediately to black as soon as Jimmie Johnson fires up that 800hp HMS #48 Lowe’s Chevy on Sunday.  That will leave only Mark Martin in the HMS #5 Kellogg’s/Carquest Chevy as the only driver to have the remotest of chances in catching “Tornado Jimmie”!  Martin is 108 points behind Johnson with just the lone race at Homestead to run.

So what started out as twelve drivers, ten races, one championship is now one driver, one race, and one champion…… Jimmie Johnson!

(Can anyone direct me to a good restaurant that serves crow on their menu?)

Congratulations to the whole Hendrick Motorsports organization!  It appears that they will have a 1,2,3 finish in the Chase points in 2009.  That is also another first for NASCAR history.