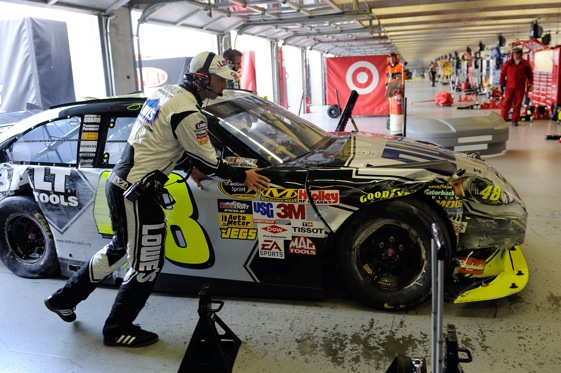 On more than one front, history was nearly written at the Texas Motor Speedway.  Kyle Busch won two of the three races scheduled during the Texas NASCAR weekend at Fort Worth!  He came within 3 laps of winning the Sprint Cup  race at Texas, thereby winning all three events at one venue.  That would have been a very historic event, since that feat has never been accomplished!   Additionally, Jimmie Johnson could have “iced” all the competition with a top 10 finish.  But unfortunately neither of those historic events occurred.

Instead, Jimmie Johnson was involved in a lap 3 wreck losing more that 100 points of his 184 point lead.  Kurt Busch passed his younger brother, Kyle, with 3 laps remaining when the younger Busch ran out of gas.

Now the venue changes to the Phoenix International Raceway.  With 2 races left, the intensity cranks up. The door has been reopened to both Mark Martin and Jeff Gordon.  With two races left, it is a three horse race.

Workingonmyredneck is looking forward to the trip to Phoenix this weekend to catch the Copper Classic, midgets and Silver Crown cars, Camping World Trucks, Nationwide, and sprint cup races!