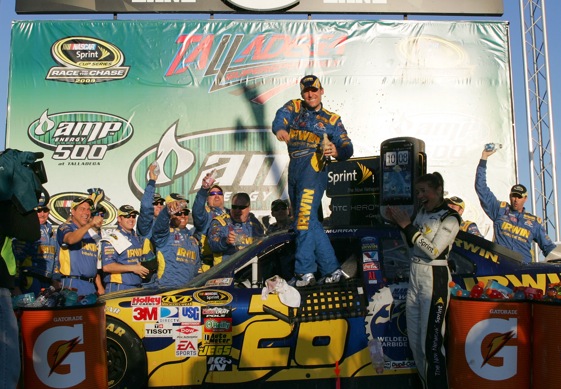 As this reported crept onto the property through the fog and the mud to find a parking spot at Talladega Superspeedway at 6:15 am Sunday in the rental car, it appeared that the race may be in jeopardy of postponement for lack of visibility!  The actual visibility at that time was approximately 150 feet.  The fog resulted from all the rain that fell in the area from Friday evening through Saturday afternoon, saturating the ground and providing all the humidity in the air.

What started out as a cold, muddy, soggy, and extremely foggy Sunday morning in Talladega, Alabama turned into a bright joyous celebration for the victorious Roush-Fenway #26 Irwin Tools Ford driven by Jamie McMurray.  McMurray’s Ford ran up with the front runners all afternoon on the 2.66 mile high banked race track at Talladega.

However, the racing itself was single file and very boring for the first 160 laps.  That was, in part, the doing of NASCAR President Mike Helton who issued one big directive to the race car drivers during the pre-race drivers meeting.  Helton instructed the drivers not to bump-draft in the turns.  The NASCAR officials would be scrutinizing the cars very closely, and there had better be spaces between the bumpers in the turns!  There would be penalties handed out if the drivers disobeyed that directive!

With that very strict edict from the “grand pooba” of NASCAR, the racing, or lack thereof, was actually a “follow the leader” type race for 178 laps.  That mundane, follow the leader, single file racing came to a screaming halt when the first “Big One” happened involving the Stewart-Haas Racing #39 Army Chevy driven by Ryan Newman who had a spectacular pirouetting flip on the back stretch, coming to a halt on his roof.

When the race was restarted, the drivers threw caution to the wind in trying to race for the win.  Unfortunately, that forced another carnage filled wreck in the tri-oval. The HMS #5 Carquest Chevy driven by Mark Martin to got caught up in the melee and became airborne and flipped.  Unlike Newman’s crash, Martin ended up coming to a rest on all four wheels!

Workingonmyredneck believes that Mike Helton’s edict did more harm than good for the race at Talladega.  His stern warning to the drivers put them on notice more than was necessary.  More importantly that warning took the raciness right out of the drivers hands, and therefore there was 180 laps of mostly follow the leader.

NASCAR sanctions automobile “racing” not single file driving!  Let the drivers police themselves, but by all means let them RACE!!  That is, after all, what we as fans pay big money to see!

What is your take on Mike Helton’s stern admonition?  Did NASCAR go way too far in instilling fear of repercussions from NASCAR for bump drafting?