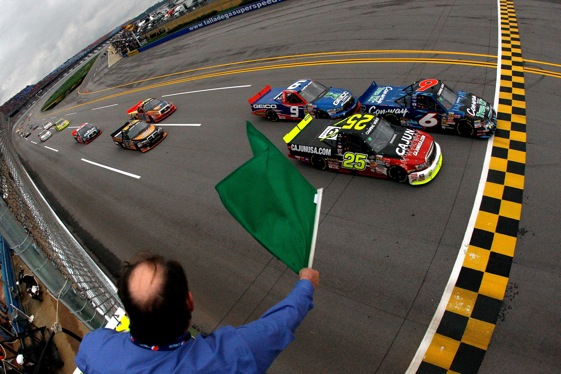 This Saturday morning started out as a gray rainy morning as we drove from Birmingham over to the track at Talladega.   For most of the 45 mile drive, it rained with varying intensities.  As we pulled into the parking lot at about 10 am, it looked as if NASCAR would run neither the Sprint Cup qualifying nor the Camping World Truck race this Saturday afternoon.  From our rental car in the parking lot, there were no noises that sounded like jet dryers on the track.

For the next four hours there was intermittent hope that the Truck race would run, but it didn’t look very promising.  By 2:30pm it quickly became apparent that NASCAR was, in fact, going to attempt to “drop the green flag” on time.  In fact the race started about 25 minutes late, which wasn’t too bad for all the rain that fell.

When the clean up finished, it was going to be a green-white-checkers restart!

The restart was exciting, fast, and furious.  As the pack crossed the start/finish line getting the white flag, signifying one lap to go, Todd Bodine shot into the lead going into turn one.  As the pack jockeyed down the back stretch, Matt Crafton jumped out into the high groove and had a big run on Bodine going into turn 3.  It looked like it was going to be a race between Crafton and Bodine!  As they came out of turn four, Kyle Busch pulled out into the outside lane from his fourth spot.  With Busch came his teammate, Aric Almirola and latched on to the back of Busch’s tuck like a bad bumper sticker!

As the Billy Ballew teammates came out of the tri-oval, Almirola welded his front bumper to Busch’s rear end and pushed Kylie passed Todd Bodine to win the race in the last 100 yards!!  With that all important “Busch push”, Almirola finished second giving Billy Ballew Motorsports a 1-2 finish at Talladega!

Workingonmyredneck can not wait for the Cup race tomorrow.