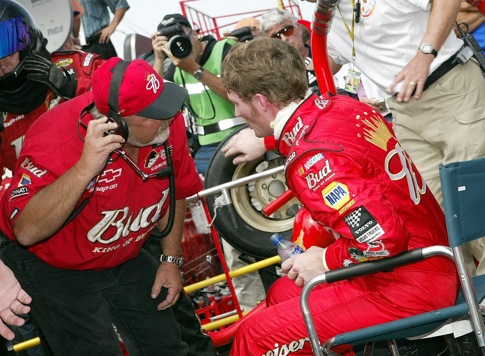 Over the last three seasons there has been a running debate over just what has happened to Dale Earnhardt, Jr. Where did the “glory days’ run off to? Who is responsible for the total lackluster performance of the, then #8 Budweiser team, and now the HMS #88 AMP/National Guard team?

There is one overlooked fact. Dale, Jr.’s best days, “the glory days”, were when “Pops” was his crew chief! “Pops” ,as he is affectionately known, is none other than his uncle, Tony Eury, Sr. Every since “Pops” turned over the reins to his son, Tony Eury, Jr., the performance has suffered!

That’s right, it is a simple fact. Dale, Jr. without “Pops” is like Jeff Gordon without Ray Evernham, or Matt Kenseth without Robbie Reiser, or for that fact Ryan Newman without Matt Borland. Are you following me on this one? That winning chemistry is something that must be preserved as long as possible.

However, there is one problem in being NASCAR’s most popular driver’s crew chief. If there are problems that arise, it most surely must be his problem! The magnifying glass is always on you! That is to say that if there is a lack of performance, the crew chief will ALWAYS get the blame.

The pinnacle came in the 2004 season, when the Eury, Sr. and Dale, Jr. combo went to victory lane six times. That duo was on track to possibly win a championship until a run in at Atlanta with rookie Carl Edwards. Since then, it has mostly been a downhill spiral for both Dale, Jr. and his Junior Nation of fans. First it was Tony Eury, Jr. that tried to find success at both DEI and Hendrick Motorsports, that failed. By midway through the 2009 season Rick Hendrick decided to try Lance McGrew as the crew chief. By the Charlotte race, two weeks ago, the wheels were starting to fall off the hot rod!

Dale, Jr. talked to reporters at Charlotte and expressed his frustrations. There were hints that he finally has figured out what he needs in a crew chief! “Who ever I work with needs to be a dictator,” he said. “The most success I had was was Tony, Sr.(Eury) and you know how he runs his ship.”

These days “Pops” Eury works for Rick Hendrick and Dale,Jr. as the crew chief on the Junior Motorsports #88 GoDaddy.com Chevy driven by Brad Keselowski. That duo is presently third in the Nationwide points for 2009!

So has Dale, Jr. lost his mojo? If so,will he ever get it back? What do you think needs to be done to try to help that team get into championship form?