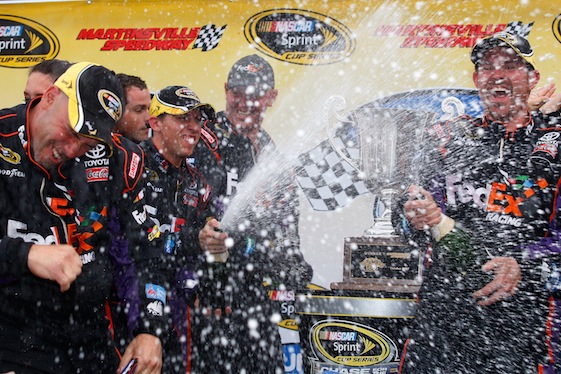 At the last Martinsville race in the Spring, Jimmie Johnson punted Denny Hamlin for the victory.  Sunday in the Fall race at Martinsville, Denny Hamlin found the perfect fix to that problem.  Hamlin, in his JGR #11 FedEx Toyota, simply didn’t allow the #48 HMS Lowe’s Chevy to get close enough to his bumper to replay the end results of the Spring race!  Therefore, Hamlin was fortunate enough to score his third victory of the season and his first in this season’s Chase races.

However, this victory for Hamlin has come much too late to allow him any chance to catch the leader.  After the Martinsville race, Jimmie Johnson has a 352 point lead over Denny Hamlin.

The Chase for the Cup standings looks like this, the HMS #48 Lowe’s Chevy appears to be heading for his fourth consecutive championship!  Johnson is still leading the points with the HMS #5 Kellogg’s/Carquest Chevy driven by Mark Martin still in second place trailing the leader by 118 points.  Still holding on third place is the HMS #24 Dupont Chevy driven by Jeff Gordon trailing the leader by 150 points.  The Stewart-Haas Racing (SHR) #14 Office Depot/Old Spice Chevy is in still fourth position back 192 points.  Juan Pablo Montoya (JPM) moved into fifth place in his EGR #42 Target Chevy back 200 points from Johnson.

Next Sunday is Talladega!  This race is always exciting and could prove to be one of the top five Chase cars’ down fall, if they are involved in one of “THE BIG ONES” that can occur there!  ” THE BIG ONE” most definitely will happen and take out a number of cars, you just have to figure out when it is going to happen at Talladega!  With even a smaller restrictor plate for this Talladega race, the cars will be bunched even tighter.  That may lend itself to triggering “THE BIG ONE”! That could spell catastrophe for some Chase teams!!

Traditionally the fall race in Talladega comes up with some very surprising finishes.  Remember the fantastic driving of Dale Earnhardt, Sr?  He started the last restart from something like 18th place and drove through the crowd to win his final NASCAR race before his untimely death in the following Daytona 500.  Last year, Carl Edwards started the multi-car crash that ended his chances of dethroning Jimmie Johnson.

The end of the season is in sight with only four more races left in 2009.  What is your take on who will be crowned the 2009 Sprint Cup Champion at the Miami-Homestead Speedway?  Is it time to turn out the lights and give the championship for the fourth consecutive time to the #48 Lowe’s Chevy? Can Martin or Gordon mount a charge to overhaul the leader?  Can “Smoke” smoke them all?  Can JPM pull off the all time fairly tale in NASCAR?