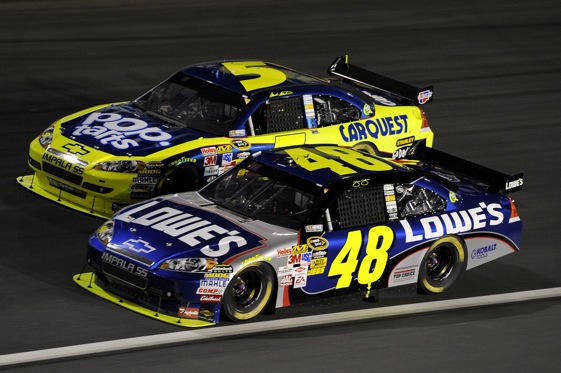 With the teams unloading in Martinsville this week, the bell is tolling for all but the top four Chase teams.  All the teams that are outside 4th place now are more than one race worth of points behind the leader, and therefore, have a very daunting task at hand.  If they leave Martinsville in that same condition, you might as well put the “hot rod on cruise control” because it is over for them with just 4 races remaining!  In fact if Jimmie Johnson and team continue to perform in their ” traditional take no prisoners Chase fashion”, then it is time to “turn out the lights the party is over” for everybody ( that was a favorite song that “Dandy” Don Meredith, the former Dallas Cowboy QB and ABC Monday Night football announcer would sing when the game was out of hand)!  Remember Johnson and crew have won 3 out of the first 5 races in the Chase, additionally that team has won 17 out of the 55 total races run in Chase history!  The #48 Lowe’s team just has something for everyone when those last 10 races come around.  They have scored 850 points more than any other driver during  the Chase in its six year history!

Here at Workingonmyredneck, it appears that if any of the top four Chase teams want to make a serious run at the championship and at the HMS #48 Lowe’s Chevy, the time is now the track is Martinsville!  Unfortunately, the #48 Lowe’s Chevy is extremely strong at this track, and for that matter all ten tracks in the Chase!  It will take a very strong run by the other 3 teams, the HMS #5 Kellogg’s/Carquest Chevy of Mark Martin, the HMS #24 Dupont Chevy of Jeff Gordon, and the SHR #14 Office Depot/Old spice Chevy of Tony Stewart, in conjunction with an extremely poor run from Jimmie Johnson’s # 48 Lowe’s Chevy this  weekend.

2 Comments on “Time Is Running Out For Some Teams”