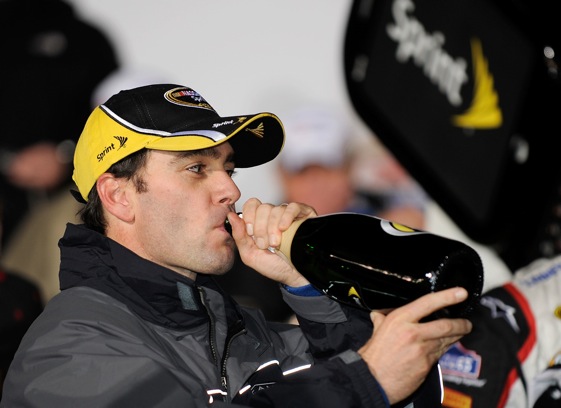 With his win last night at Lowe’s Motor Speedway, Jimmie Johnson just won the third race out of the first five in the 2009 Chase for the Cup.  That fete has never been accomplished before in the brief six year history of The Chase.  The Hendrick Motorsports #48 Lowe’s Chevy has written yet another page in the NASCAR history book.  If that isn’t enough, you better get ready for that team to write an entirely new chapter in NASCAR history with four consecutive championships!  That will set this team apart from Cale Yarborough, and all the rest of the historic NASCAR drivers of yore!

Workingonmyredneck was so convinced that there was no way that the HMS #48 Lowe’s Chevy could possibly win four consecutive championships.  The odds were stacked against them doing it four consecutive times.  Well be damned with the odds, it sure looks a lot  like 2006, 2007, and 2008 at this point in The Chase.  Once again Jimmie Johnson and Chad Knauss have “let the dogs out of the yard”! Workingonmyredneck should have listened to Brad Daugherty at the beginning of the season, when he predicted that Johnson would win a fourth championship in a row in 2009!

The Hendrick Motortsports #48 Lowe’s Chevy has now won 17 out of the 55 total races that have been run in the Chase since its inception!  That is  phenomenal, 30.9% of the Chase races have been won by Jimmie Johnson!

Can we spell dominate? I think that in this case it is spelled JIMMIE JOHNSON!

The Chase has now narrowed down to a four car race, with just five races left before crowning a Sprint Cup Champion.  Jimmie Johnson now has a 90 point lead over Mark Martin in the HMS #5 Kellogg’s/Carquest Chevy, and is lengthening the lead each week. The third place team of Jeff Gordon driving the HMS #24 Dupont Chevy is 135 points behind the leader.  Back in fourth place is Tony Stewart driving the Stewart-Haas Racing #14 Office Depot/Old Spice Chevy.   Coincidentally,these four teams are linked together somewhat.  The first three, Johnson, Martin, and Gordon are all Hendrick Motorsports teammates.  The fourth, Tony Stewart, is a quasi teammate of Hendrick Motorsports.  Stewart-Haas Racing buys their engines and chassis from Hendrick Motorsports.  So one could say that the championship race has narrowed down to a Hendrick quest for the Sprint Cup Championship!

Does anybody know where I can get a moderately priced CROW DINNER? (They must also sell Diet Coke so that I can wash it all down!)