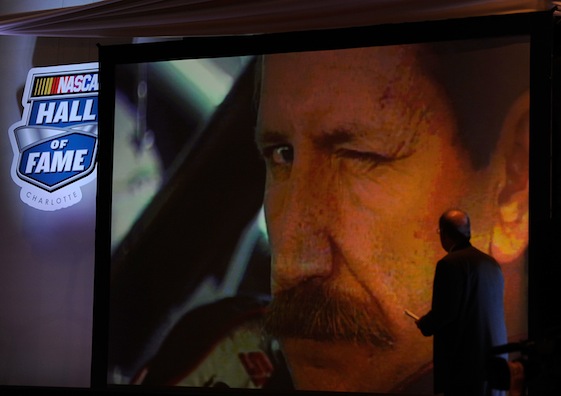 Charlotte, N.C. – Several of those who took part in Wednesday’s voting for the inaugural class of the NASCAR Hall of Fame stood up to remind other voters that what they were doing was nothing less than deciding whose faces will appear on the sport’s Mount Rushmore.

If that’s true then it will be Bill France Sr., Richard Petty, Bill France Jr., Dale Earnhardt and Junior Johnson whose faces will be carved into the the NASCAR mountainside.

Those five drivers emerged as the first class of the new Hall of Fame.  “This is a big day,” Brian France, chairman and CEO of NASCAR said.  Few disagreed. And while not everybody agreed on the outcome of the vote, all respected it.  “They’ll all get in, everybody on that list (of nominees),” Petty said.

Wednesday’s vote took place at the Charlotte Convention Center, which adjoins the still-under-construction of the hall in uptown Charlotte.

Now that the first class has been formally introduced to the world, the first five were all deserving individuals.  I would like to examine the legacy of just one, Dale Earnhardt, Sr.

It has been 8 1/2 years since the untimely death of  “Man in Black” at the Daytona 500, in February 2001.   What exactly is Dale Earnhardt, Sr.’s legacy?  Is it his record tying seven championships?  Is it his 76 victories?  Is Dale,Sr.’s legacy his toughness?  Could it be that he will best be remembered for his son, Dale ,Jr?  Could it be Dale Earnhardt Incorporated, DEI?  Any or all of the above mentioned items could, in fact, be his legacy.

There might be a few other things that really may be his legacy to this sport we call NASCAR, and in fact all of auto racing.  After his death, NASCAR got very serious about driver safety.  Because of ” The Intimidator’s ” death, the HANS device, the head and neck restraining device, was quickly mandated.  Additionally, NASCAR accelerated the implementation of the SAFER barriers that buffer the retaining walls at the racetracks.  Also NASCAR began to study the need for a new safer car, termed the Car of Tomorrow,which was fully implemented in 2008!

Only time will define what Earnhardt’s true legacy to the sport will be.  One thing is for sure, however, now that he has been enshrined in the very first class of inductees to the NASCAR Hall of Fame, he will be immortalized for all time!

What do you think is Dale Earnhardt, Sr.’s legacy to this sport?