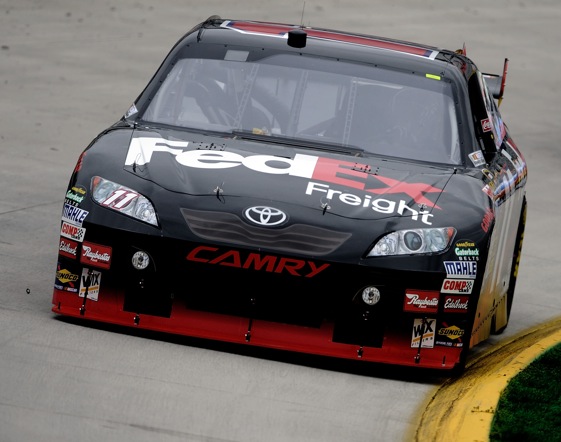 Well NASCAR has invaded the West Coast this weekend for the fourth race in the Chase for The Sprint Cup.  Needless to say, all of the Chase contenders are, in fact, California Dreamin’!

To the bottom four teams it is time to “let the big dog eat”! Starting with Ryan Newman, who is 164 points behind, Carl Edwards is165 points down, Kasey Kahne is back 190 points, and Brian Vickers is 250 point out of first place, they all must have a terrific race or it is OVER! These four drivers are slightly more than one race worth of points behind the leader! The most points that a driver can make up in one race is 161 points.

With the passing of each of the next 7 races, the number of teams that have a legitimate shot at the Championship will die on the vine.  There are no “mulligans” left for the teams to use!

Saturday Denny Hamlin, driving the JGR #18 FedEx Toyota, cranked up the heat on his competitors by scoring fast time and securing the pole position for Sunday’s race.  Has the #18 FedEx Toyota team re-grouped and re-focused for the remainder of this Chase?

Hamlin sits 99 points out of first place, with just 7 races to go for the Chase.  The time is running out very quickly.  If this team is going to have a chance to win the championship there are a few things that must happen.  Denny Hamlin and crew chief, Danny Ford, must live, breathe, and sleep as one!  In addition to that fact, the entire team must perform without error for the remaining 7 races.

So as the season winds down to precious few races left, the Chase contenders just might be singing this 1966 Mamas and Papas tune, CALIFORNIA DREAMIN’ while racing Sunday!

“All the leaves are brown and the sky is grey.

I’ve been for a walk on a winter’s day.

California Dreamin’ on such a winter’s day”

(The Mamas and The Papas)