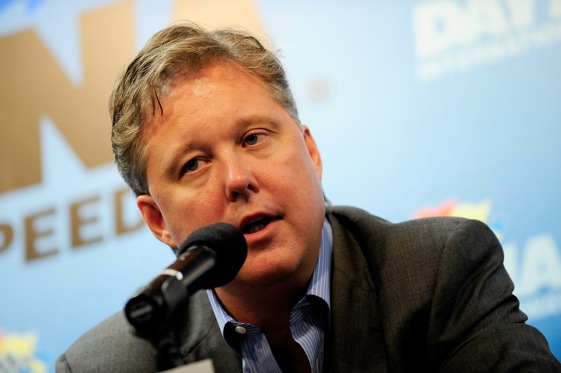 NASCAR CEO Brian France announced, during a teleconference Wednesday, that the start times for 28 of the 36 races will be more standardized with a 1 pm Eastern start time.  The teleconference also featured executives from all three of NASCAR’s “broadcast partners, Fox, TNT, and ESPN/ABC.

“The new starting times for the 2009 race schedule of 1pm is a response from the NASCAR core fan base”, say France.  “They want to start watching the race at an earlier start time”, he continued.  France went on  to say that the new start times were not easy to “birth”.  He said that all three networks had to juggle the schedule to make those times work for 2010.  The new start time will not apply to the West Coast races, their start times will be 3 pm ET.

The Daytona 500 will be included in the 1 pm ET start times for 2010.  That moves the start of that race two and a half hours earlier, reflecting the start time of the race prior 2003.

In another related topic, France stated that there will not be a trend towards two day events, such as was the case at Atlanta over Labor Day.