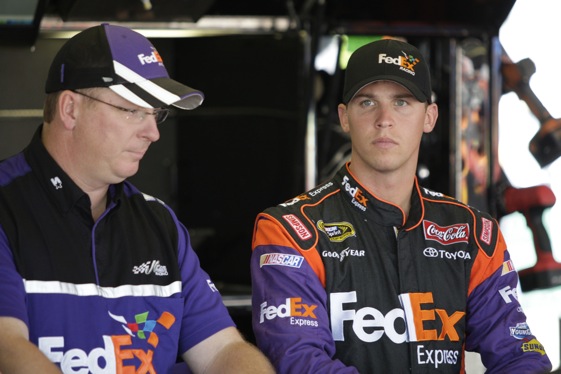 The driver of the Joe Gibbs Racing #11 FedEx Toyota, Denny Hamlin, still has not forgiven Brad Keselowsi for their on-track skirmish nearly two weeks ago in the Nationwide race at Dover!  Hamlin hasn’t put that incident on the back burner, brushed it aside, hasn’t swept it under the carpet, no matter how you cut it he definitely hasn’t forgotten about it!  Hamlin is still issuing very unflattering remarks about Keselowski’s driving talents.

When asked if he and Keselowski have talked about the incident, Hamlin just shook his head from side to side signifying the negative.  “No haven’t talked to him at all”, Hamlin replied.  ” I don’ think he’s man enough to call me face-to face.  Just don’t think it’s his style”.

What Hamlin believes is Keselowski’s style is to sometimes- often times- drive beyond his capabilities.  “How he uses his talent to me is questionable,” Hamlin continues.

However to be fair, Dale Earnhardt, Jr. thought enough of Brad Keselowski’s talents two years ago to hire him to drive for his Nationwide Series team.  Additionally, The Captain, Roger Penske has just signed Keselowsi to drive his #12 Verizon Dodge for the 2010 season!  It would appear that such support speaks volumes for Mr. Keselowsi’s racing talents!

What is your take on this issue?