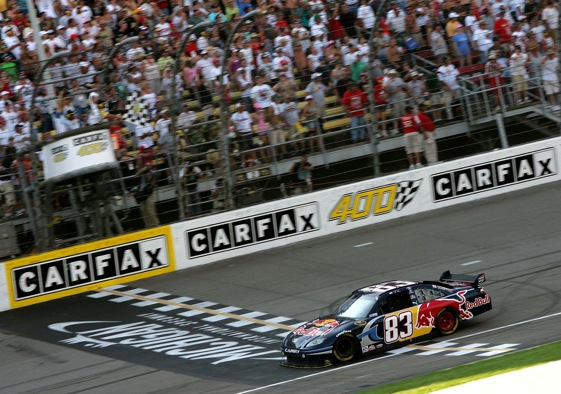 Michigan was an exciting weekend for Brian Vickers, to say the least!  It culminated in the victory of the Carfax 400 at Michigan International Speedway Sunday, the second in his Cup career.

As is the case of late with the races at Michigan International Speedway, Sunday proved to be a day requiring a  fast motor, good fuel mileage, in addition to having a good handling hot rod!

On Saturday, Brian Vickers showed the field that he had a very fast  piece. At  the end of qualifying, it was the #83 Red Bull Racing Toyota driven by the young gun, former Busch Series Champion (Nationwide Series), Brian Vickers sitting at the top of the speed chart and on the pole for the Carfax 400!

As the race was coming to the closing stages of the 400 miles, the caution flags were not falling as some crew chiefs had planned in their pre-race preparation.  So in a move that was, to say the least, a very risky decision, crew chief Ryan Pemberton elected to keep Vickers out on the track and try to STRETCH the fuel run out to the very finish of the race.  It truly was a “ROLL THE BONES” maneuver!   That winner-take-all, very gutsy call ended up taking the #83 Red Bull Racing Toyota team to Victory Lane!

With his Carfax 400 victory neatly tucked under his belt, Vickers has moved to with 12 points from that coveted top 12 that will be in The Chase for the Cup!

Additionally today the news broke that Red Bull Racing FINALLY put their signature on a multi year contract with their top driver, Brian Vickers.  They have been dragging their heels for months.  Meanwhile in their stalling around, Vickers has scored five polls and now a victory for Red Bull Racing.

Anybody know what the heck  the Austrian CEO of  Red Bull and Red Bull Racing was waiting for??