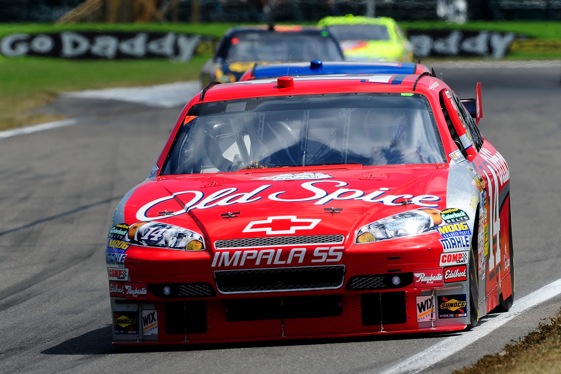 Tony “THE SMOKER” posted his third win of the 2009 season in the rain delayed Heluva Good! Sprint Cup race from Watkins Glen, NY today.  Stewart had to hold off a hard charging #47 Lil Debbie’s Toyota driven by Marcos Ambrose, the winner of Saturday’s Nationwide Series race.

Stewart has notched seven road course victories in his Sprint Cup career, five of them coming at The Glen.  This was the third victory of the season for the #14 Old Spice/Office Depot Stewart-Haas Chevy, and the 36th win of Stewart’s Sprint Cup career.  He has seven consecutive top two finishes at The Glen, winning in 2002,’04,’05,’07, ’09, and finishing second in 2006, and 2008.  Additionally he has finished first or second in 8 of the past 11 road races!

On lap 63 there was a violent crash involving the #77 Mobile 1 Dodge of Sam Hornish, Jr.,  the #24 Dupont Chevy driven by Jeff Gordon, and #31 CAT Chevy driven by  Jeff Burton.  The race was red flagged for 19 minutes in order to clean up the race track that was strewn with debris from the carnage!

There are just four races left before the top 12 are locked into the Chase for the Cup.  Time is starting to run out for the few hopefuls that are outside looking in!

IT IS TIME GET UP ON THE WHEEL AND GET THOSE ELBOWS OUT!  IF YOU CAN’T RUN WITH THE BIG DAWGS, THEN YOU NEED TO STAY UP ON THE PORCH!