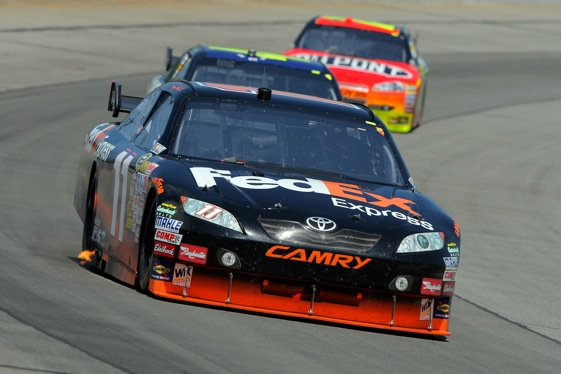 The rain postponed the Sunoco Red Cross Pennsylvania 500 at  Pocono Raceway until Monday.  The clouds parted and the sun shined on the #11 FedEx JGR Toyota driven by Denny Hamlin.  Hamlin bumped his way into the lead with ten laps to go when he “nudged” Bowyer and drove past him.  The victory was the first for Hamlin in 50 races, which jumped him into 5th place in the Chase standings.  His last victory was the 2008 spring race in Martinsville.

Since taking over the #11 FedEx Joe Gibbs Racing Toyota, Hamlin has scored 5 victories, three of them have come at Pocono Raceway!  This race took on a very personal meaning for Denny and his family this week.  Earlier in the week Denny Hamlin’s grandmother, Thelma Clark passed away.  Obviously this was a very emotional victory for both Denny and the #11 FedEx team.

Juan Pablo Montoya (JPM) hung on to finish second at Pocono.  This fortifies the #42 EGR Target Chevy team’s dominating run last week at Indianapolis.  Last week JPM was the dominating race car but was penalized with a stop and go through of the pits, after he was issued a  speeding ticket at Indianapolis last week.   Nonetheless, as stated by Illinois traffic ticket attorneys, another fine performance for JPM.  With his second place finish, Montoya moved from 10th to 8th in the standings.

After this race the Chase standings got a little tighter.  Some of those outside the top 12 “leap frogged” either closer to, or into the top 12!  Time is running out on those that are either outside of the top 12, or who are beginning to slump in their performance!

This is the time that if you got anything for the leaders, “you got to get up on the wheel and let the big dog eat”!!