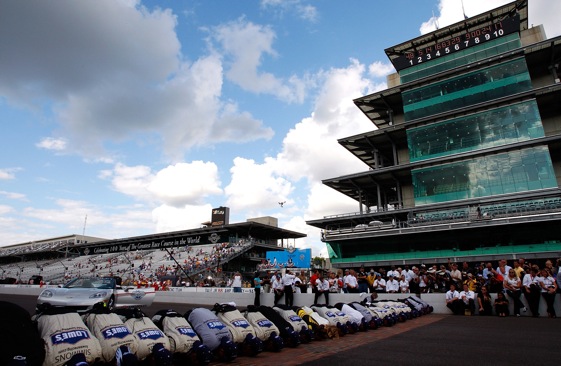 Mark Martin in the #5 Kellogg’s/Carquest Chevy was the fastest in qualifying Saturday.   Juan Pablo Montoya driving the #42 Target Chevy was the dominate race car for the first 125 laps in the race today.   But Jimmie Johnson drove around Mark Martin on the last restart on lap 125 of 140 laps.  That pass on the last restart was just enough to catapult Jimmie Johnson to the 2009 Brickyard 400 win.  The #48 Lowe’s Chevy was the first NASCAR team to win back-to-back Brickyard 400’s in its 16 year tenure at The Indianapolis Motor Speedway.

Even though this was the second Brickyard 400 that the #48 Lowe’s Chevy team won in row, it will be remembered as the race that Juan Pablo Montoya lost!  JPM driving the #42 Target Chevy led 116 of the first 124 laps at Indy.  However, he received a speeding penalty when exiting the pits on the last yellow flag of the race.  That erased a 6 second lead and ultimately placed Montoya in 12th place for the restart.  That allowed Jimmie Johnson to be on the outside line and sail past Martin, who was in the inside line,  as they entered turn one!  From that point, Martin had his hands full trying several times to edge up on Johnson’s bumper and get by him, all to no avail.

Prior to the waiving of the green flag at the start of the race, there was an underlying whisper in the garage area of ,”will the tires work this year”?   The one thing that was very obvious, Goodyear and NASCAR did what they had to do prior to the race to fix the tire fiasco from the 2008 race.  Completing  seven tests, using thirty-one different teams , and logging over 13,000 miles at the Brickyard, there was not even a hint of failing or excessive tire wear!  So that was a success story!