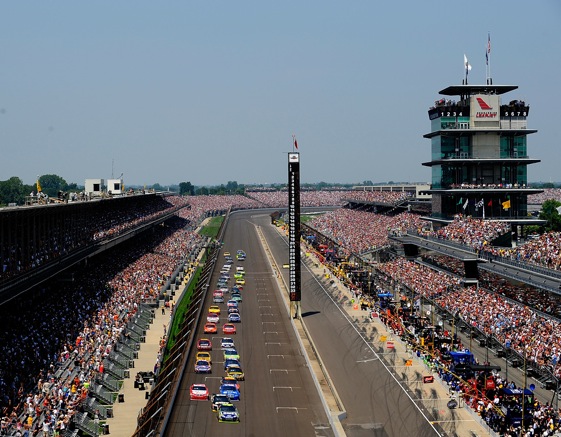 It has been 360 days since the 2008 Brickyard 400.  That race was undoubtedly the biggest fiasco in recent NASCAR history!  As you well remember, the race was run in 12-15 lap segments because of catastrophic tire failures!  It looked like an afternoon of short track heat races, rather than a 400 mile NASCAR race.

Since last year’s race, there has been seven separate tire tests by both NASCAR  and Goodyear, trying to find a tire that works at the Indianapolis Motor Speedway.  There have been 31 teams involved in the different tire tests, logging over 13,00 miles at The Indianapolis Motor Speedway in those tests!  The ultimate consensus from all the drivers and teams is that Goodyear has struck upon a good tire for this year’s race!  The tire appears to be both durable and fast!

After listening to some of “the NASCAR talking heads, the two time winner of the Brickyard 400 Tony “THE SMOKER” Stewart is a big favorite.  After all, he is the home-grown Rushville, IN favorite for sure!  Stewart has taken the #14 Office Depot/Old Spice Chevy out of obscurity into the championship lead in less than half a race season.  That is quite an improvement!

One shouldn’t forget the only NASCAR driver to be in same category as Indy Car drivers A.J. Foyt, Rick Mears, and Al Unser, Sr. as four time winners at this hallowed track.  Jeff Gordon, driving the #24 Dupont Chevy, is the only “door-slammer” that has won at Indianapolis Motor Speedway four times.  Therefore as far as NASCAR goes, he is in a category all by himself!

It this reporter’s opinion that the winner will be one of these two drivers come  sundown Sunday evening in Indianapolis, IN!

However, I am still a charter member of JR.NATION!