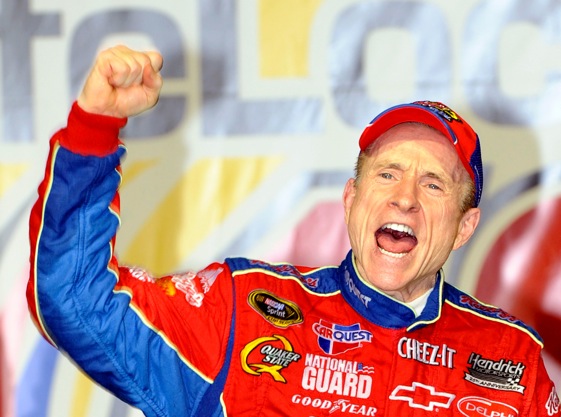 Mark Martin driving the Hendrick Motorsports #5 Kelloggs/Carquest Chevy has scored his fourth victory of the 2009 season, more than any other driver in the Sprint Cup Series.  The 50 year old race car driver is having a resurgence of his career in 2009!  He has proven to his competitors that he is re-energized and can wheel a Cup with the best of them!

Martin had the dominate car all evening, but lost the lead late in the race to Jimmie Johnson after a restart.  Johnson chose the outside line for the restart with Denny Hamlin right behind him.  The fourth place Hamlin got onto the bumper of Johnson and pushed him deep into turn one, getting the #48 Lowe’s Chevy loose and sliding up the track.  That move by Hamlin allowed him to take the lead.  Then just one lap later Hamlin and Vickers were locked in a battle for the lead and both cars got loose, allowing Martin to re-assume the lead.  That was all it took for Martin to get up on the wheel and lead the pack to the checkered flag.

Even though Martin has tallied the most wins of any driver in Sprint Cup so far this season, it  has only vaulted him into 11th place in the championship standings.  Martin is only one point ahead of the 12th place team of Matt Kenesth.  That puts the Hendrick Motorsports #5 Kelloggs/Carquest Chevy in a very tenuous position.  The team with the most wins may or may not wind up in the Chase for the Championship, depending on the results of his team in the next eight races!  Martin’s team needs much more consistency for the next eight races to solidify a berth in the Chase.

So the obvious question is, can the #5 Kelloggs/Carquest Chevy become much more consistent in the remaining eight races and secure themselves a place in the Chase?  If so, does Martin and team have a realistic chance to win his first Sprint Cup Championship?  What is your opinion?

PS   ol Kylie Busch was involved in a crash and later blew his engine finishing 33rd!  He strutted off and avoided the media for interviews!  Poor ol Kylie!!!