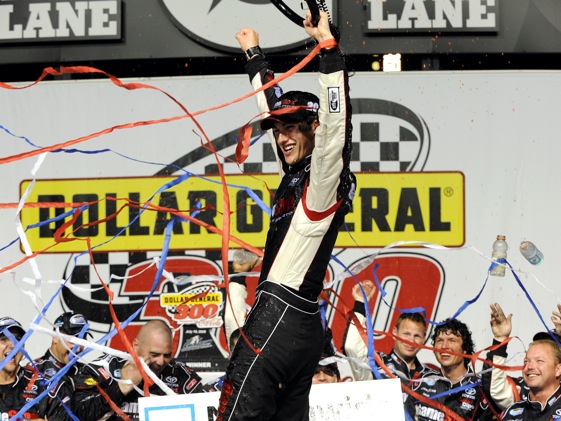 Joey Logano held off his teammate, Kyle Busch, for the victory Friday night in the General Dollar 300 at Chicagoland Speedway.  The Joe Gibbs Racing 1-2 finish was the fourth time that it occurred this season.  The General Dollar 300 was Joey “Sliced Bread” Logano’s third victory of the 2009 Nationwide season.  It was also his tenth top five finish of the season.

What appeared to be a mistake on the last yellow flag by not pitting for tires by the #20 JGR Game Stop Toyota, actually turned into a brilliant move!  Logano and Vickers stayed out on the last yellow flag, while the remaining cars on the lead lap all pitted and took either two or four tires for the 9 lap sprint to the finish.

It appeared that Logano was now going to be a sitting duck on the restart.  With ol Kylie Busch sitting a couple of rows back for the restart, four fresh “feel goods” on the ground, and aggressiveness running in his veins, it would seem a forgone conclusion that The Las Vegas Weasel  driving the #18 JGR Toyota would overhaul his teammate for the victory!  However on the restart, “SLICED BREAD” got up on the wheel, kept the loud pedal done, and drove that Toyota really deep into turn one with hopes that those old worn out tires would stick just one more time.  In fact, that is exactly what happened!  For those last eight laps Logano drove that Toyota like he was double parked!!  Ultimately with the skill of a veteran, Logano drove off from the rest of the field to record his third victory!

It is refreshing top see this young man living up to all the hype and pressure that has been piled upon him at such a young age.  Not only is he dealing with being a nineteen year old teenager, but also he is competing in a “man’s profession” with all the pressures that go with the sponsors, as well as the other commitments of the job.  In the post race interview, Logano comes across with the enthusiasm and humility of a well grounded young man

Now in contrast, the interview with ol Kylie Busch, aka TLVW, shows just the opposite personality traits!  He pouts, whines, and generally shows his childish immaturity about finishing second. As a point of accuracy, by Busch finishing second in the race, he actually increased his lead over Carl Edwards in the Nationwide Series championship points!  But he still acted as if he and his team failed!  Go figure that!

What is your opinion on Logano, is he over hyped or is he living up to his press?  How about ol Kylie, do you think that he needs to take a chill pill?