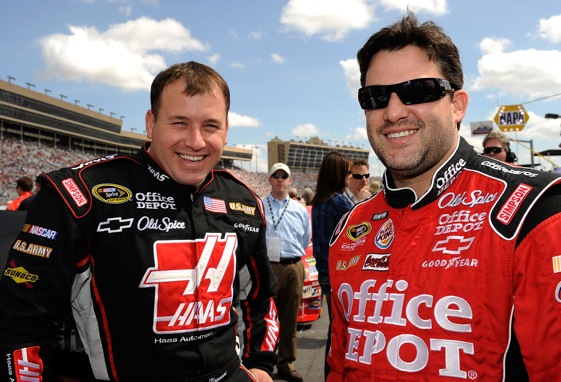 Now that NASCAR is making its second visit to Daytona, and the season is approaching the midway point, it is time to evaluate the first half of the season.  Let’s evaluate, as  “Big” Bill France called it, The Show.

So far in 2009, there have been 3 first time winners.  Brad Keselowski was the first this season.  The finish at Talladega that led up to Keselowski’s win was exhilarating, to say the least!  Keselowski admitted that not a single driver would draft with him.   So with that knowledge, he latched onto the bumper of the #99 Ford Fusion of Carl Edwards and systematically marched their way into the lead in the last two laps.  The finish needs not be chronicled any further, however, it was a wild ride that Edwards took!

Both David Reutimann and Joey Logano won races via the rain and gutsy crew chief calls to stay out.  Neither cars were first place cars on those particular Sundays, but that is racing!  As was evidenced, sometimes race winners come from strategic calls versus being faster than all the rest of the cars.  Winning  races is as much strategy as it is speed these days.

One surprising uptick to this season is the performance of the newly formed Stewart-Haas Racing.  Both of the teams started out somewhat slowly at the Daytona 500.  In fact, during practice before the Dual 150’s, the #14 Office Depot Chevy and the #39 Army Chevy collided with each other taking out both of their primary cars in one crash.

But as the early season unfolded, both of these teams gathered up steam and marched their way into the top 12.  Most impressively was the way that Tony Stewart, in the #14 Office Depot Chevy, carved his way through the field to stand at the top of the standings.

July 4th NASCAR is back to where the season started, Daytona.  This time around there is added excitement, double file restarts.  This new feature will add excitement and tension to the late race restarts, guaranteed!!  The fireworks will start as the green flag flies!

So Saturday night when you sit down to watch the race, cinch those belts down tight, pull your gloves up over your elbows, it is going to be thrilling!