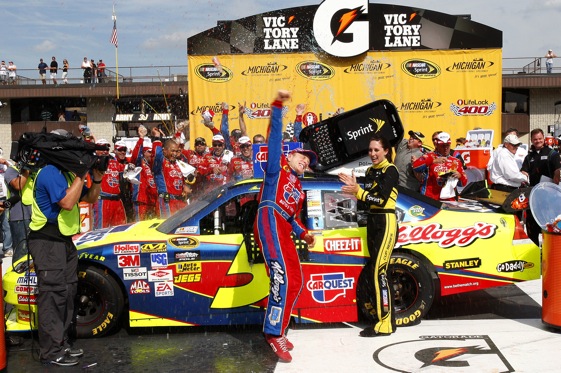 For the third time this season, Mark Martin takes the checkered flag to win the race!  But there was lots of drama as the white flag was unfurled.  The #5 Car Quest/Kelloggs Chevy was way back in third place, about 150 yards behind Johnson and Biffle.  The #48 Lowe’s Chevy led the most laps, and was truly the dominating car of the race, took the lead in the closing laps of the race from Greg Biffle with about 6 laps to go.  As Johnson came to the white flag his car sputtered and ran out gas, giving Greg Biffle the lead for the apparent victory.  But low and behold, as Biffle came off of turn 2 heading  down the back stretch, the #16 3M Ford, too, sputtered and ran out of gas, giving the lead and the race victory to Mark Martin!

For the second year in a row, this race winner at Michigan was determined by fuel mileage.  Last year Dale Earnhardt, Jr. was the benefactor of great fuel consumption.  Many people naysayers will bad mouth Martin’s victory as just being the person that was in the right place at the right time.  That may be so, but in the record books a win is a win and there are no asterisks!  That is all of that thing called racing luck!

With this victory Martin pushed his place in the season standings up to 8th place.  Through the first 15 races of the season, it appears that the duo of Mark Martin and crew chief Alan Gustafson hasproven to be a winning combination for HMS!  That combination is turningaround the fortunes of #5 HMS Kelloggs Chevy.  Every since Terry Labonte won his last championship for Hendrick Motorsports in 1996, the #5 Kellogg’s/Carquest Chevy has not been running on all eight cylinders.  Even with the two years that ol Kylie Busch was chauffeuring that race car, the #5 team just wasn’t peforming well week to week at the race tracks.

At an age when almost all race car drivers have long ago hung up the helmet and fire suit, the 50 year old Mark Martin seems to be re-inventing himself as a premier NASCAR race car driver.  He is tied with the most wins by a driver this season, both he and Kyle Busch have won three times.