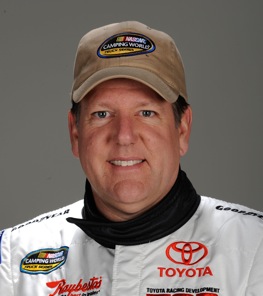 With the present state of the economy and the impact on the auto industry, even the reigning champion from the Camping World Truck Series wasn’t immune from the sponsorship problems.  Last week  Red Horse Racing had to shutter the #1 Toyota team  because there was just not enough sponsorhip money to keep that team running and pay all the bills.

Saturday night J.B. took his fire suit and helmet to Berlin Raceway in Marne, MI to race in a super modified race.  It was there that Benson was involved in a firey crash that has sent him to the hospital with multipe injuries  including broken ribs and burns.  The latest reports indicate that Johnny Benson  is listed in serious but stable condition.

You might ask yourself, “why would Benson, a big time NASCAR race car driver, go racing at a local short track?”  Because Johnny Benson IS A RACER, pure and simple!!  Racers do one thing,  they RACE!

My thoughts and prayers are with J.B. and his family.

Till next time, I am still working on my redneck!